The history of Lockets

A Locket is a kind of pendant that can be opened to reveal a space used to put a photo or another little object as a curl. Today lockets are asked to make a present to loved ones in various occasions like St. Valentine, baptisms and weddings.

The Lockets usually have only one or two photos, but there are also some specially designed medallions that can have even eight. Some lockets have been modelled as medaillons called “Spinner”. They have the characteristic that even if they are attached to the chain, the frontal medallion is not fixed and is therefore free to turn. This was a common style during the Victorian age. In 1860s the “memory” lockets have began to replace the mourning ring as the favourite jewelry style for the mourning.

Another kind of locket is the “Keepsake” that can be made with a sheet of glass in the anterior side so that, what is inside, can be seen without opening the medallion. Such kind of medallions are generally used for objects as the curls which could fall outside and lose if the medallion were opened more times.

Another kind of locket was in filigree style with a little cushion in the centre where you can add some drops of parfum.

But the lockets were used also during the war! Some American or English uniforms of the second World War showed some openable bottoms that in reality hid a working bush. 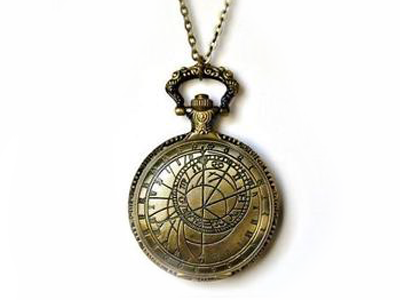